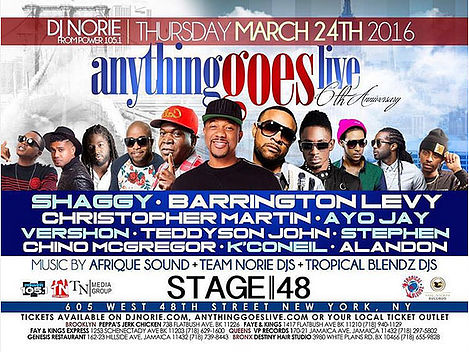 DJ Norie’s recent installment of Anything Goes 6th Anniversary this past Thursday, March 24 proved to be another successful event. The club was packed to the maximum capacity. Patrons made the most of it since the following day many observed the Good Friday pre- Easter holiday.

The one artist that really caught everyone’s attention was the Afropop sensation Ayo Jay making his US debut. The Nigerian native which last summer collaborated with hip hop artist Fetty Wap on the single “Your Number,” also ”Don’t Say That,” and “Jay Baba” proved all to be crowd pleasers. Ayo Jay in tow with an all-male trio dance troupe brought excitement. His well celebrated performance led to a curtain call by the faithful in attendance.

The never comparable Shaggy was the real show stopper as he performed close to an hour his performance included such hits from his catalog including “It Wasn’t Me.”

Another new artist on the scene sent the crowd into a frenzy, Vershon gave it his all on his bellowing out of “Inna Real Life” decked out in a black baseball cap and matching leather jacket. It is clear to say this young talent definitely has stage presence.

Barrington Levy gave a glimpse back at the past as he performed “Murderer” and “Shine Eye Girl”. With his chants of stiddly-diddly-diddly-whoah, came a resonating of drum and bass. Levy who first debuted in 1979 took all of us back down memory lane as he was the closer of this momentous occasion. It was in fare essence to say the patrons on hand surely got their monies worth.